What do you do when you’ve helped a technology company achieve greater inbound success in a short period of time? Help that company take their marketing efforts and thought leadership to the next level! Here’s a story about how SmartBug® helped a client produce content that made waves in its industry and achieved stunning conversion numbers, winning multiple prestigious MarCom awards along the way.

When we first partnered with CVM in late 2015, CVM faced the same marketing challenges we see with many of our clients: Its website wasn’t attracting enough visitors, and the visitors that were arriving weren’t converting into leads.

The solutions SmartBug proposed to fix CVM’s challenges were straightforward, but the impact our ideas delivered was dramatic. Within 15 months of beginning our retainer, CVM’s organic traffic more than doubled. Contacts increased 700 percent, and CTA conversions also saw a massive jump.

At the beginning of 2017, CVM was ready to take its marketing to the next level and wanted to create something that would have a large impact on the industry.

The State of Supplier Diversity reports have cemented CVM Solutions as a thought leader in the industry. SmartBug helped us achieve our vision for this original research, from ideation to completion."

Build Success, Then Build Something New

The result was the 2017 State of Supplier Diversity reports—two surveys that examined the state of the industry from the points of view of supplier diversity professionals and diverse suppliers.

SmartBug Inbound Marketing Strategists Jessica Vionas-Singer, Kristen Patel, and Chelsea Boice worked with CVM Marketing Manager John Suarez to come up with the idea of conducting original research to examine the state of the industry from the points of view of supplier diversity professionals and diverse suppliers.

In February 2017, the surveys, promoted on the CVM website and through email marketing, were made available and drew an impressive 422 respondents. To date, the 2017 reports have been downloaded more than 1055 times, with a submission rate of 39 percent.

The wealth of data produced was immense, as one can imagine, given 34 questions split between two surveys and more than 400 responses. The challenge would now be to take all of the data and produce something that was easily digestible and impactful. After careful analysis of the data by the strategists, SmartBug Senior Copywriter Joe Gillespie took the results and wrote two comprehensive documents: the 2017 State of Supplier Diversity reports.

Yet those were only one piece of the puzzle, because we didn’t want the reports to be a dry data dump of black-and-white charts that would put the reader to sleep. SmartBug Designer Andy Williams was up to the challenge and started by creating a concept spread for Suarez to review. Once the direction was locked in, Williams went to work creating 49 double-page spreads of the two reports, utilizing a variety of chart types, pull-out quotes, illustrations, and highlighted statistics.

When designing these reports, it was important to follow a few key practices:

Sticking to CVM’s color palette of lime green, navy blue, cyan, and purple, the finished result was vibrant and, although packed full of data and statistics, easy to consume and process.

And the campaign didn’t stop there! SmartBug created two infographics that highlighted some of the key findings of each report and were published on CVM’s blog with calls to action (CTAs) to download the full reports. We also included the research in multiple blog posts, again pointing to the full reports.

To maximize the ongoing impact of the research, SmartBug added CTAs to download the reports on CVM’s most popular blog post, “What Is Supplier Diversity and Why Is It Important?” which consistently generates more than 1,000 organic views a month. These CTAs perform at 5 percent conversion rate versus the typical 1-2 percent most marketers are used to seeing.

The 2017 campaign’s landing page converts at an impressive 39 percent. Considering that the average e-book converts at 5-15 percent, CVM’s reports have far surpassed expectations. Also, the new contact rate from the reports is an incredible 17.6 percent.

Furthermore, a lead nurture workflow was implemented to help nurture these new contacts down the funnel, with a goal of them becoming SQLs. This workflow got a 5.2 percent performance rate, which is impressive given the high bar for success (versus many lead nurtures, which have a goal of just moving to the next stage, for example).

Given this success and the impact CVM was making in the supplier diversity community, SmartBug submitted the campaign to the prestigious MarCom Awards and was honored as a Gold Winner—one of 36 MarCom awards we won in 2017.

Finally, the accolades CVM received for the reports from others in the supplier diversity industry were significant. Thought leadership was a goal of the reports—and this goal was definitely achieved. SmartBug and CVM followed up the 2017 State of Supplier Diversity reports with a 2018 version. In April 2018, CVM released two separate reports with 50+ pages of statistics and analysis and, to date, more than 1,500 people have downloaded the reports and the landing page has a 40 percent submission rate. To fully leverage the effort, the SmartBug team also created two infographics, four blog posts, an email campaign, a press release, and a social media campaign called “Shaping Our Future” that solicited quotes from industry experts.

The 2018 campaign took home four prestigious MarCom Awards, including a platinum award for the original report (submitted as an e-book along with the accompanying infographic) and gold awards for the campaign itself and the “What Is Supplier Diversity and Why Is It Important?” blog post.

With our help, CVM is attracting customers and establishing itself as an authority in supplier diversity.

Suarez concluded: “The State of Supplier Diversity reports is consistently CVM’s best performing offer month-over-month and has resulted in one of the best new contact and SQL streams for our salespeople.” 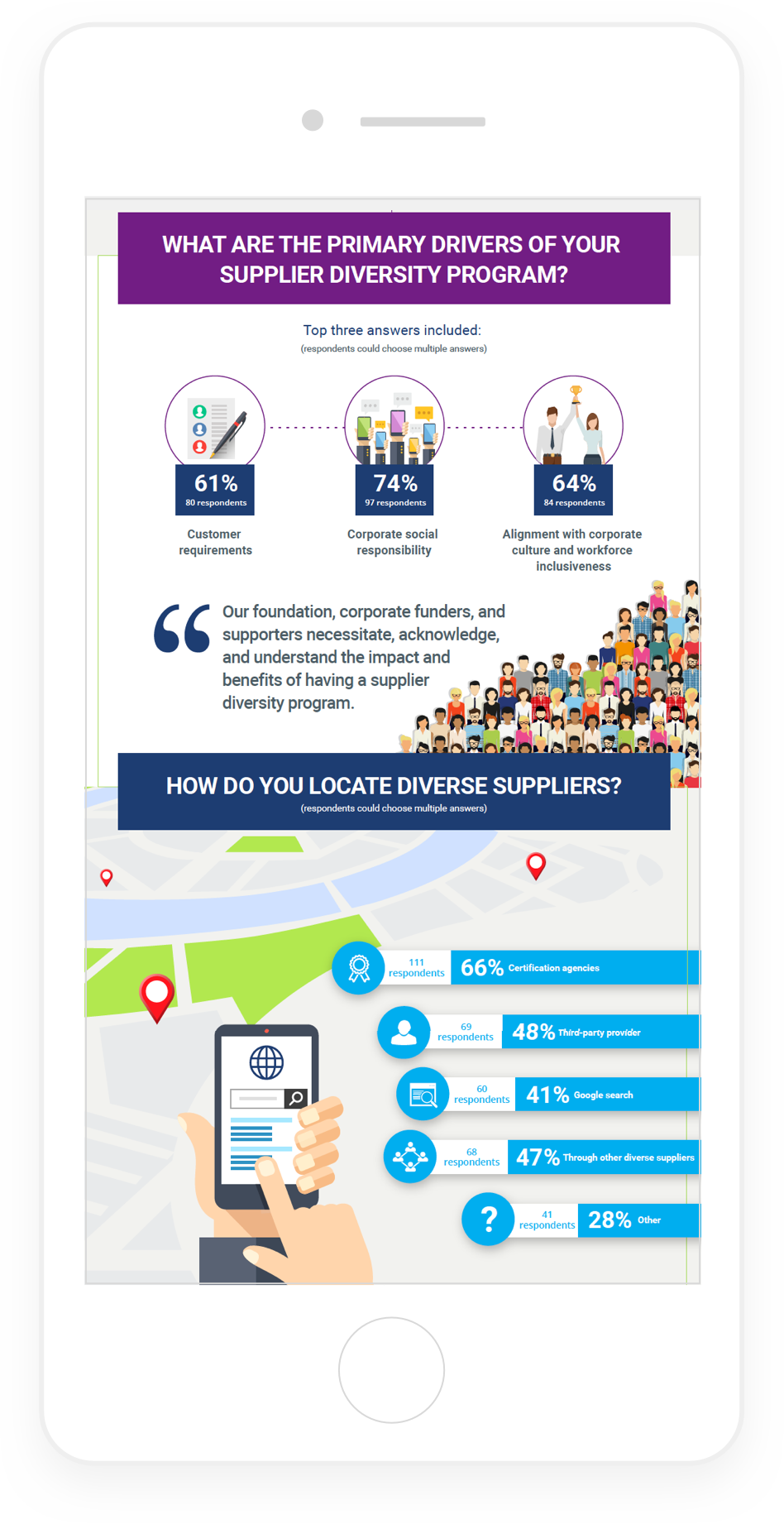