There are two kinds of blog posts: the standard, run-of-the-mill posts that perform reasonably well but don't bring traffic to your website long-term and the shiny gems that bring in more and more visits over time. Those "shiny gems" are called "Compounding Blog Posts". Instead of decaying, like other posts, they're constantly working to help you attract more visits. Compounding posts typically represent about 10 percent of all blogs published, but they bring in as much as 38 percent of your traffic, according to a HubSpot report. Just one compounding post is generating as much traffic as six decaying posts. But how do you write compounding posts? Are they random special snowflakes or can marketers plan for them in editorial calendars?

So it's true: compounding blog posts represent a huge potential in terms of traffic growth to your blog and website. And while it may seem like they appear randomly in your previously published blogs, there are certain characteristics that many of these posts have in common - characteristics that you can replicate to build posts that are more likely to compound in the future:

How to Identify a Compounding Post in your Analytics

Standard “Decaying” posts receive most of their traffic when they’re first published; they don’t represent a long term traffic solution. Compounding posts, however, are often not the most popular when initially launched. Instead, they steadily produce more and more visitors every month, until they’ve surpassed the traffic they brought in at initial launch (and still continue to grow). Here’s how HubSpot found decaying and compounding posts differ over time: 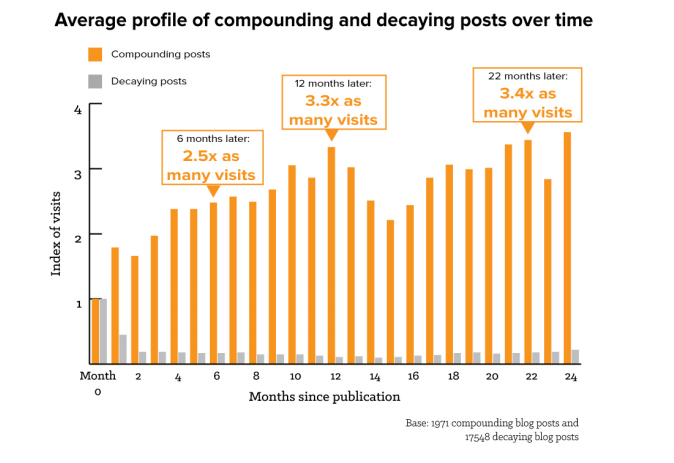 In this figure, you’ll see that decaying posts (grey) quickly drop in months two and three, before traffic levels off in months following. A compounding post (orange) will receive two and a half times as many visits than in its initial launch month just six months after publication. Two years later, the number of visits per month has tripled.

Posts Not Likely to Compound

Just as there are some elements that compounding posts have in common, there are also characteristics of decaying posts to watch out for. Posts that are highly likely to decay are:

When writing blog titles, avoid dating them in a specific way, for example “___ of the Month,” or “This year’s greatest _____.” Also avoid referencing a specific timely item, such as “New Research Finds _______.” These types of titles tell readers the information they’ve encountered is likely outdated, which hinders potential.

Should You Expect All Posts to Compound?

Blog posts that grow over time do represent a huge opportunity for attracting visitors and converting leads, but you can’t expect every post you write to generate traffic long term. Writing titles that are likely to compound should be one step in your overall blogging strategy, but it’s important to balance broad, easy-to-read overview posts with in depth content that thoroughly explores a topic; with reactions to news items. Tactical guides and how-tos should be balanced by strategic content. It’s all about building a balanced editorial calendar that will help you meet your marketing goals.