Why Someone Should Consider Switching to a Dvorak Keyboard

Before you read any further, take a second and look down at your keyboard. (If you are on your smart phone, pull up your keyboard.) Have you even thought about your keyboard layout since elementary or middle school?

Have you ever considered that this layout actually has a name and that some English-speaking people actually use a different layout entirely? If not, get ready for your mind to be blown.

Okay, now without looking (remember, you just looked at it!), can you name the first six letter keys of a traditional keyboard on the top left? (Okay, you can look again now.)

The first six letters actually give this keyboard layout its name: QWERTY. Let’s chat about the QWERTY layout a bit.

In the 1860’s, Christopher Sholes invented the typewriter and created the QWERTY layout. As usage of the typewriter became widespread, users learned to type using Sholes’ layout. Then along came the computer and using the same layout that users already knew and could easily switch to just made sense.

According to some sources (although not documented anywhere), Sholes placed letters strategically to slow down users so that the typewriter keys wouldn’t stick.

Let that sink in for a minute. The keyboard that we still use today may have actually been designed to slow you down.

Other sources claim, instead, that Sholes created and modified the QWERTY layout based on feedback from telegraph operators who used Morse code.

In either case, the QWERTY layout was not designed for a computer user. As legions of people learned this layout in using the typewriter and then switched to computers, and then new generations learned the QWERTY layout, it solidified its position as the standard.

Source: By Drawn by Mysid in CorelDRAW. - Own work, CC BY-SA 3.0 https://en.wikipedia.org/wiki/QWERTY 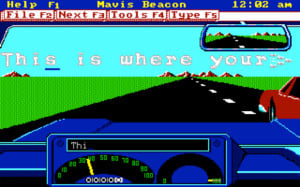 For those of you not familiar with Mavis Beacon Teaches Typing, the software has lessons and “games” such as this one where you practice. Every mistake resulted in a bug on the windshield! Image Source: mobygames.com

So, like many little kiddos, I learned to type in middle school using Mavis Beacon Teaches Typing (okay, that probably dates me a bit; what do kids use now-a-days?). I got decent at it (and practiced a lot) and remember getting speeds of 80-90 wpm at one point (although I can’t remember how accurate I was). In high school, they created “Typing II” for me because all the other students were just learning how to touch type (this was back in 1998; my teacher friend says this now happens in elementary school).

Okay, now I’m really dating myself, but in college, I was usually the only one in class who took their notes on a laptop, although sometimes there was 1 or 2 others who did. I brought my cute little 2-pound Fujitsu to all of my classes and took outlined notes like a pro (with the exception of Calculus, which required paper and pencil).

All of this to say, I was heavily vested in the QWERTY keyboard.

Around the time I was taking that cute laptop to college, my boss introduced me to the Dvorak keyboard layout, named after August Dvorak who patented it in 1936 along with his brother-in-law, William Dealey. According to Wikipedia, “Dvorak and Dealey's objective was to scientifically design a keyboard to decrease typing errors, speed up typing, and lessen typer fatigue.”

To that end, they developed the Dvorak keyboard, which has been simplified to the modern layout below.

As you can see, the vowels and common letters are on the home row with lesser-used letters on the top and bottom. Common letter combinations – like TH – were also taken into consideration when it was developed.

In fact, the statistics between the two keyboards are stark when you compare how much typing is done on each row:

My boss, co-worker, and I decided we would try it over winter break. Conveniently enough, Windows comes with an option to change the keyboard to a Dvorak layout without getting a new keyboard or other software. We used a label maker to put little stickers over each key with its new letter, since we quickly found out that popping the keys off and putting them in different places didn’t work given the curvature of the keys.

The adventure seemed successful enough for a while until I went back to class and my typing couldn’t keep up with the professor anymore. I quickly reverted to my QWERTY keyboard and thought that I would keep practicing Dvorak at work. While I am sure it is possible, my brain was unable to switch back and forth, and I dumped Dvorak. (My colleagues went back to QWERTY as well even though the co-worker remained a stanch supporter.)

It wasn’t until my right hand started having shooting pains from my middle finger up my hand in 2011 that I considered switching back.

At that job, I got two weeks off for Christmas, and I decided to use that break to re-teach myself how to type on a Dvorak layout.

So in between wrapping presents and making cookies, I sat on the couch with my laptop and watched Christmas movies while learning and practicing where the rearranged letters were. (I used a free website; no fancy car racing games with bugs this time!)

I also decided upfront that when I got back to work, I wasn’t going back no matter how frustrating it was.

And, boy, let me tell you – it was frustrating. Being used to typing at 80 wpm and then having to type at molasses speed was really difficult. Work productivity slowed. Taking notes during meetings was impossible. Every day required patience.

It didn’t stop being hard until a good month in. And I didn’t recover my QWERTY speed until a year into the switch.

But I stayed the course and am still typing with a Dvorak layout four years and three jobs later.

Along the way, I discovered the following pros and cons of switching to a Dvorak keyboard:

Would I do it again?

The short answer is yes – absolutely.  The minimization of pain in my right hand alone made the switch worth it. In an ideal world, kids would have the option of using either layout when they learn to type so that there wouldn't be a switching cost to begin with.

Of course, there are other options out there as well. Of the dark horses, Dvorak leads the pack; however, there are more layouts if you are interested in ditching QWERTY:  http://mentalfloss.com/article/52483/6-non-qwerty-keyboard-layouts.

What do you think? Would you consider learning a new keyboard layout?