How to Use Social Media Marketing for Reputation Management

Benjamin Franklin said it best: “It takes many good deeds to build a good reputation and only one bad one to lose it.” Your brand’s reputation is no exception.

Technology has completely changed the way businesses today can (and should) approach reputation management. Thanks to social media, consumers have come to expect almost instantaneous interactions from the companies they choose to do business with. And this is especially true in times when something isn’t going well.

This means that social media is not just a viable option for reputation management. It’s a necessary one.

Let’s take a look at what happened at Intercontinental Terminals Company (ITC) in Houston recently. Over a period of three days, a total of eight chemical tanks containing components used to make gasoline caught on fire. Smoke could be seen throughout the entire city of Houston, and residents in the surrounding communities were concerned. Personally, I was as well. I live about 15 miles away from where the fire occurred, and it’s hard to deny the potential for harmful toxins in the air with chemicals burning for several days straight.

ITC addressed the community throughout the entire three-day period with updates via press releases and press conferences. However, their presence on social media was limited, and this led to a firestorm of negative publicity for the company.

Unfortunately, ITC isn’t the only company that’s fallen into this trap. In fact, 58 percent of executives believe online reputation management should be addressed, but only 15 percent actually do anything about it.

Long story short: If you aren’t utilizing social media to manage your brand’s reputation, you need to start … and quickly! If it’s not a priority, you’re going to have a hard time maintaining trust with your loyal customers and potential prospects alike.

Although most people view reputation management as something that is only necessary during a disaster like the one at ITC, there are several other instances where social media can be leveraged to maintain your reputation. Let’s dive in!

Let’s face it—no matter how great you are at what you do, you are always going to run into dissatisfied customers. It’s a natural part of doing business. However, the internet has made it difficult for companies to conceal when someone is unhappy with a product or service. Over time, these negative reviews can degrade any trust that’s been built with customers and potentially limit the possibility of future business.

Let’s stop for a moment to consider these stats:

This may seem shocking, but negative reviews should be seen as opportunities, not hindrances. Why? Because 30 percent of consumers believe that the way a company responds to a negative review is a key factor when judging the credibility of a local business.

So how should you respond?

Remember, negative feedback or criticism is an opportunity to grow and learn from your mistakes, so the next time you see one come in, don’t be afraid. Approach it with an open mind and show everyone that you care!

If your business has an active presence on social media, you’ve probably encountered a troll. No, not the cute kind with the crazy, colorful hair. I’m talking about the ones who are motivated to wreak havoc on your reputation—for fun.

Admittedly, it can be hard to differentiate between a troll and someone who is genuinely upset. However, there are several key tactics that trolls use, including:

If you determine that you are, in fact, dealing with a troll, here are some things you can do:

I’ll be the first to admit that I’m not perfect. I’ve made plenty of mistakes in my career, and some of those have included posting inaccurate messages on social media. Embarrassing? Absolutely! The end of the world? Hardly.

What can you do if you find yourself in the same situation?

Whether you like it or not, social media is here to stay. And although it can definitely present some challenges when it comes to reputation management, it’s also an opportunity to address your visitors in real time, build trust, and maintain a strong relationship with your community for years to come.

Want to learn more about how you can create a more personalized experience with your marketing efforts? Download our free ebook, How Video and Inbound Marketing are Humanizing Financial Services. 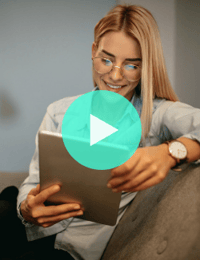 Reach your financial customers of the future and improve relationships with existing customers by learning:

How Video and Inbound Marketing Are Humanizing Financial Services

Christina Clark was formerly an Inbound Marketing Strategist at SmartBug Media and brings a wealth of creative talent to the organization. She has experience implementing both traditional and inbound marketing strategies for companies in various industries and has been a HubSpot power-user since 2015. She specializes in lead generation, lead nurturing, and content marketing tactics. Read more articles by Christina Clark.